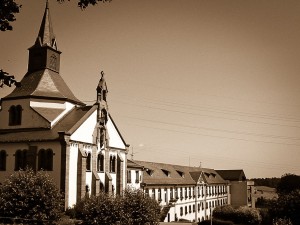 It all began back in the Middle Ages, when Benedictine monks explored the upper reaches of the Fecht valley and settled on the eastern foothills of the Vosges. They cleared the forests, created pastures, raised cattle and shared their knowledge with the local population.

On the slopes above the village of Orbey, monks from Pairis Abbey began to make a washed-rind cheese which became known as “Munster”, a name derived from the word “monastery”.

On the western side of the Vosges, this same cheese was known as “Géromé”, from the name in dialect of the town of Gerardmer, where the “marcaires” (farmers) gathered every 24 June, the feast of Saint John the Baptist, to pay their tithes in cheese to the Dukes of Lorraine, on whose land their Vosges cattle grazed.

After centuries of rivalry, it is still unclear which came first : Munster or Géromé. Since 21 May 1969 “Munster-Géromé” benefits from protected appellation of origin (AOP) status, recognised by an official decree that defines its conditions of production and maturation, as well as its geographical region of production.